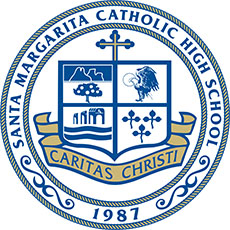 The Administrative Board is made up of the President, Principal, Vice Presidents, Assistant Principals and Athletic Director. Various directors of departments report to the Board on a regular basis along with an elected representative who brings issues of concern from members of the faculty and staff. The Board meets weekly and is responsible for developing and approving general school policies. It is charged with the responsibility to provide vision and direction to the mission of SMCHS.

Andy Sulick is an Orange County native. His father is a retired Marine officer and his mother was a Catholic school elementary teacher in South Orange County. Andy holds a master’s degree in Catholic educational administration from Loyola Marymount University, a bachelor’s degree in education/history from the University of Redlands, and is a member of Santa Margarita Catholic High School’s Charter Class of 1991.

Andy began his teaching career at his alma mater in 1996 where he not only taught history, but coached football and golf. In 2001, he left Santa Margarita for the corporate world and gained valuable business experience over the next two years while working at FedEx. In 2003, Andy began his post as founding director of admissions at JSerra Catholic High School in San Juan Capistrano. His successes at JSerra ultimately propelled him into the role of assistant headmaster in 2012.

In the summer of 2014, Andy was appointed president of Santa Margarita Catholic High School returning to the “Eagles’ Nest.” His proven record of success in enrollment marketing, development, business, administration, and deep ties to the alumni community serve him well in his role as president. Andy is proud of establishing a new program at the school, Eagles Edge, which provides students with “real-world” growth and networking opportunities. As president, Andy maintains ties to his original passion of teaching by guest speaking in the community at area high schools, colleges and nonprofit organizations.

Cheri Wood joined the school's leadership team as principal of SMCHS in 2019 with administrative responsibilities focused on academics, faculty, student life and spiritual development through the school’s charism of Caritas Christi, the love of Christ. Wood has over 30 years of educational leadership experience, most recently at Cornelia Connelly School in Anaheim where she served as head of school. Previously, she held principal positions in both the Diocese of Orange and the Diocese of Washington D.C. and she has held teaching positions at Marymount High School in Los Angeles and in the Upper School of St. Margaret’s Episcopal School in San Juan Capistrano. Wood’s background in education is rooted in Catholicism, curriculum development, collaborative leadership and cultivating a transformative school environment. Wood earned a Post-Master’s Certificate in School Administration from Notre Dame of Maryland University in Baltimore, completed the Klingenstein Summer Fellowship at Teacher’s College, Columbia University and holds a Master of Arts in Psychology and Bachelor of Arts in Psychobiology from Occidental College, Los Angeles.

Mr. John Hayek joined SMCHS in 2017, overseeing academics. John is a graduate of De La Salle High School in Northern California and St. Mary's College in Moraga. He received a bachelor's degree and teaching credential in English while simultaneously playing on the men's soccer team. He earned his master's degree in education administration and his administrative credential at National University. John began his teaching career at De La Salle before relocating to Southern California. He then taught and coached at Fallbrook High School, eventually becoming their athletic director and later an assistant principal. His career also includes serving as an assistant principal of San Marcos High School in San Diego where he helped facilitate the construction of a new $150 million campus. Prior to joining the Eagle family, John served as the Fallbrook Union High School District alternative education principal. John has a wealth of knowledge in areas as varied as instructional leadership, curriculum development, innovative classroom technology, strategic planning, professional learning communities, facilities, athletics and much more.

Tom Smith began working at SMCHS as the band director in 1987. From 1993 to 2002, he was the activities director. Since then, Tom has been the assistant principal for student services. His responsibilities include supervision of various departments on campus including Attendance & Discipline, Audio/Visual, Education technology, Information Technology and the Nursing Office.

In addition, Sammer oversees the Campus Dining/Eagle Eats program and serves as the head of Campus Security operations.  Sammer is a school liaison to first responders, participates in various conferences and training opportunities and brings his experience back to the Nest to help provide a safe and secure Catholic education environment for students, employees and visitors.

Mrs. Harrison started her journey in the world of education as a math teacher in 2010 at Nicholas Junior High School in Fullerton, and joined the team here at SM in 2012 as a math teacher and volleyball coach. Since 2018, Mrs. Harrison has been serving as the school’s director of classroom instruction providing mentorship for new and veteran faculty. Her duties also included collaborating with the administrative team on professional development for teachers and hiring quality faculty. As an educational leader, teacher, and mother, she is uniquely qualified and passionate about quality instruction, inclusion and equity. As a product of Catholic schools, and a SM alumna from the class of 2000, she is also committed to the school’s mission and charism of Caritas Christi and will continue to blend our Catholicity with the needs of all students.

Mrs. Harrison holds a Bachelor of Science in advertising and a Bachelor of Arts in psychology from the University of Colorado, Boulder, and a Master of Arts in Teaching (MAT) with a clear credential in mathematics from Chapman University. In her role, she will continue to support all teachers with teaching strategies, lesson planning, classroom management and identification of curriculum resources while overseeing and providing strategic leadership and vision related to the school’s efforts in diversity, inclusion, equity and justice.

Patrick in an alumnus of Santa Margarita from the class of 2006. He began his career in education in 2010 as a theology teacher at Servite High School. From there Patrick worked in University Ministry at Loyola Marymount University where he helped support the university’s mission and Catholic identity by running their regional service immersion programs. Patrick returned to Santa Margarita in 2017 as the Director of Campus Ministry where he oversees an office that runs 10+ retreats for students a year, offers multiple liturgies, including all-school masses, and provides a service learning program that is uniquely built for each grade level.

As director, Patrick also oversees the Peer Ministry program which is a 50+ student leadership class within the religion department. In teaching these two sections, students receive the tools to be effective ministers and leaders.

As Assistant Principal, Mission Integration, Patrick assists the school’s mission as a Catholic institution by sitting on the Administrative Board several committees, including Threat Assessment, Mental Health and Wellness, and Curriculum Council. In these roles he works to ensure the charism and mission of the school are present throughout the campus.

Michelle Balash Lencioni began her career with Ernst & Young where she earned her CPA license and became an Audit Manager. In her current role at SMCHS, Michelle oversees the Business Office, Facilities and is the senior executive responsible for managing the financial actions and reporting of SMCHS.

Sergio began his career in education at his alma mater, Santa Margarita Catholic High School, in 1996 where he taught Economics, Government, Cultural Geography and coached football. In 2002, he left Santa Margarita to teach and coach at Clovis West High School in Fresno, California before returning to Southern California in 2007. For ten years Sergio worked in the athletic department and coached football at JSerra Catholic High School.

In the winter of 2017, Sergio returned to Santa Margarita Catholic High School and continued his passion of working in Catholic education. Currently, Sergio has responsibilities in a multitude of areas including athletics, marketing, finance and the school’s five-year strategic plan.