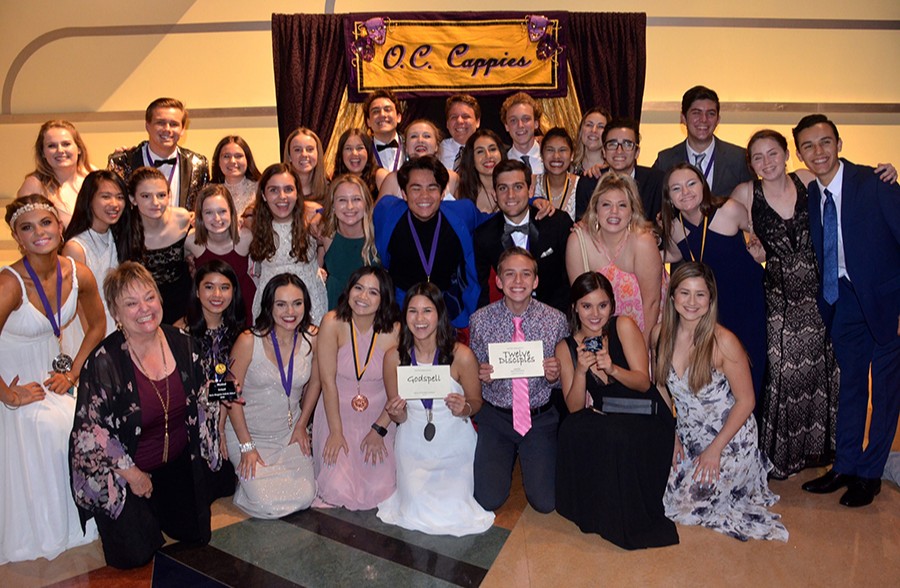 The 2018 Talon Theatre fall production, Godspell, took home four Cappies out of eleven nominations at the 15th annual OC Cappies Gala at the City National Grove of Anaheim on Sunday, May 20th.

Santa Margarita was well represented at the gala with over eighty cast, crew, and parents in attendance. When Godspell was announced as the winner of the Cappie for "Best Musical", the group erupted into cries and screams of jubilation and then the cast swarmed the stage to receive the beautiful crystal trophy.

“I am very proud of the cast and crew of Godspell. The show was a true collaboration so this award truly belongs to everyone involved. Students designed the set, costumes, lights, projections and helped to choreograph and stage the show,” said show director, Amy Luskey-Barth.

Godspell was the first fall show that Talon Theatre produced in the dome since the facility was designated for Performing Arts.

“Doing a musical in the fall was a huge undertaking. In addition to mounting a full scale musical in less than two months, the cast took on the backpack and hygiene drive for the homeless in conjunction with the show and donated $3000 to the Illumination Foundation. The journey of this show was profoundly spiritual and artistically rewarding.  This Cappies recognition was all the more meaningful because these students invested their hearts and souls.  I am also deeply grateful to the generous donors, underwriters, and volunteers who assisted with the hygiene drive. This was a prime example of Theatre on Purpose,” said Luskey Barth.

Upon hearing the news that Godspell had won the Cappie for Best Musical, Bishop Kevin Vann who portrayed a disabled homeless person in the show remarked, “How wonderful for all! This is quite an honor and a credit to all. I am really happy and proud!”

Godspell was directed by Amy Luskey-Barth with Musical Direction and accompaniment by Chris Winn and Choreography by Casey Garritanto. Cappies Advisor was Tania Ayoub and Cappies Mentor was Debra Barbre.