Santa Margarita Catholic High School’s Talon Theatre program took home 44 MACY Awards on Tuesday, a record number of awards for the program. The 48th Spirit of the MACY Awards was held at the Segerstrom Center for the Arts on June 5. Over the 2017-18 season, MACY judges saw 57 productions produced by schools in Orange, San Diego and Los Angeles counties. The MACY Awards program encourages, recognizes and rewards achievement and excellence in high school musical theatre.

Santa Margarita’s Talon Theatre spring musical, “West Side Story,” was recognized as one of the top ten musicals with The Spirit of the Macy Award. “West Side Story” also won Best Show Ensemble and Best Choreography. Among the award recipients were recent graduates Alec Melosini of Trabuco Canyon, who won best dramatic actor for his role as Tony, and Drew Schlingman of Mission Viejo, who won best supporting actor for his portrayal of Action. The show garnered a total of 27 MACY awards.  Additionally, the cast of Talon Theatre’s fall musical, “Godspell,” brought home 17 MACY awards. 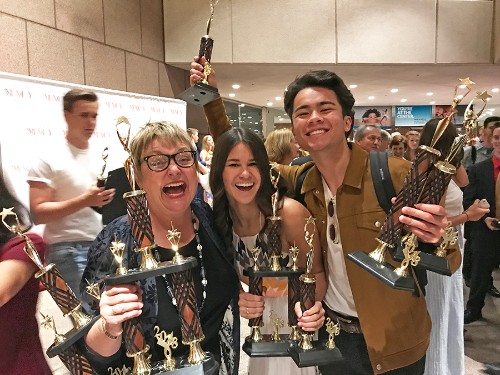 “I am so very proud of all the students who participated in our 2017-18 season,” said Talon Theatre Director Amy Luskey-Barth. “This was an extraordinary year.”

Luskey-Barth said the Best Ensemble Award was particularly meaningful, an affirmation of each student involved in the production as well as an outstanding creative team that included Casey Garritano, whose choreography elevated “West Side Story” to a professional level, and the immense talents of Chris Winn, the show’s musical director, and Francisco Calvo, the show’s orchestra conductor.
“Theater is a collaborative art and the expertise of the production staff combined with the talent of the student performers, designers, and technicians was on full display this year,” Luskey-Barth said.

Luskey-Barth also expressed her gratitude to Santa Margarita’s supportive parents, the parent-lead Arts Alliance, the entire performing arts department, The Most Rev. Bishop Kevin Vann of the Diocese of Orange and the SMCHS administration.
“The recognition that both “Godspell” and “West Side Story” received at the MACY awards and the Cappies is due to the love and passion embodied by the entire Talon Theatre community,” she said. 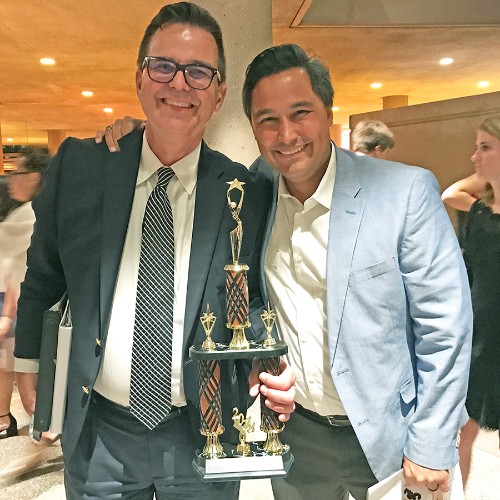 But despite the numerous accolades, Luskey-Barth said she’s most proud of the positive impact the students are making in the world through theatre. The 2017-18 season, “Choose Love,” explored the idea that community begins with recognizing our common humanity and the rights of all to live in peace by breaking down barriers and striving for understanding. Both shows offered a glimpse into how true community begins with personal relationships.

“Awards are nice and everyone enjoys a sense of pride in what they represent, but I am most grateful for the fact that Talon Theatre was able to shine light on two very important issues through our productions,” Luskey-Barth said.

“Godspell” increased awareness and support for the homeless community. The school’s theater program raised $3,000 which was donated to the Illumination Foundation to assist a family in need with first and last month’s rent. The cast and crew also reached their goal to fill 650 backpacks with hygiene items for the homeless community. “West Side Story” helped raise $1,500 for the Puerto Rican hurricane relief fund through Catholic Charities. Students tackled the premier musical about overcoming fear and prejudice and how two people, Tony and Maria, "Choose Love" over hate despite enormous cultural differences.

“This is truly Theatre on Purpose,” Luskey-Barth said. “The students of Talon Theatre are using their gifts and talents to make a positive difference in our world. They are living our school charism of Caritas Christi (the love of Christ).” 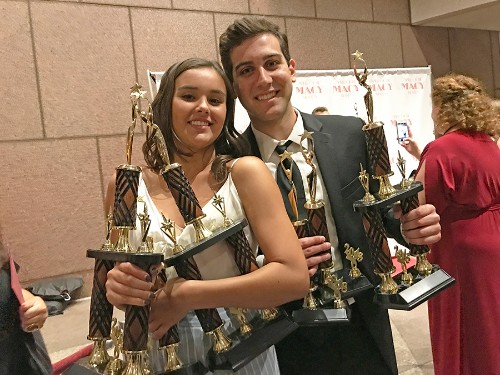