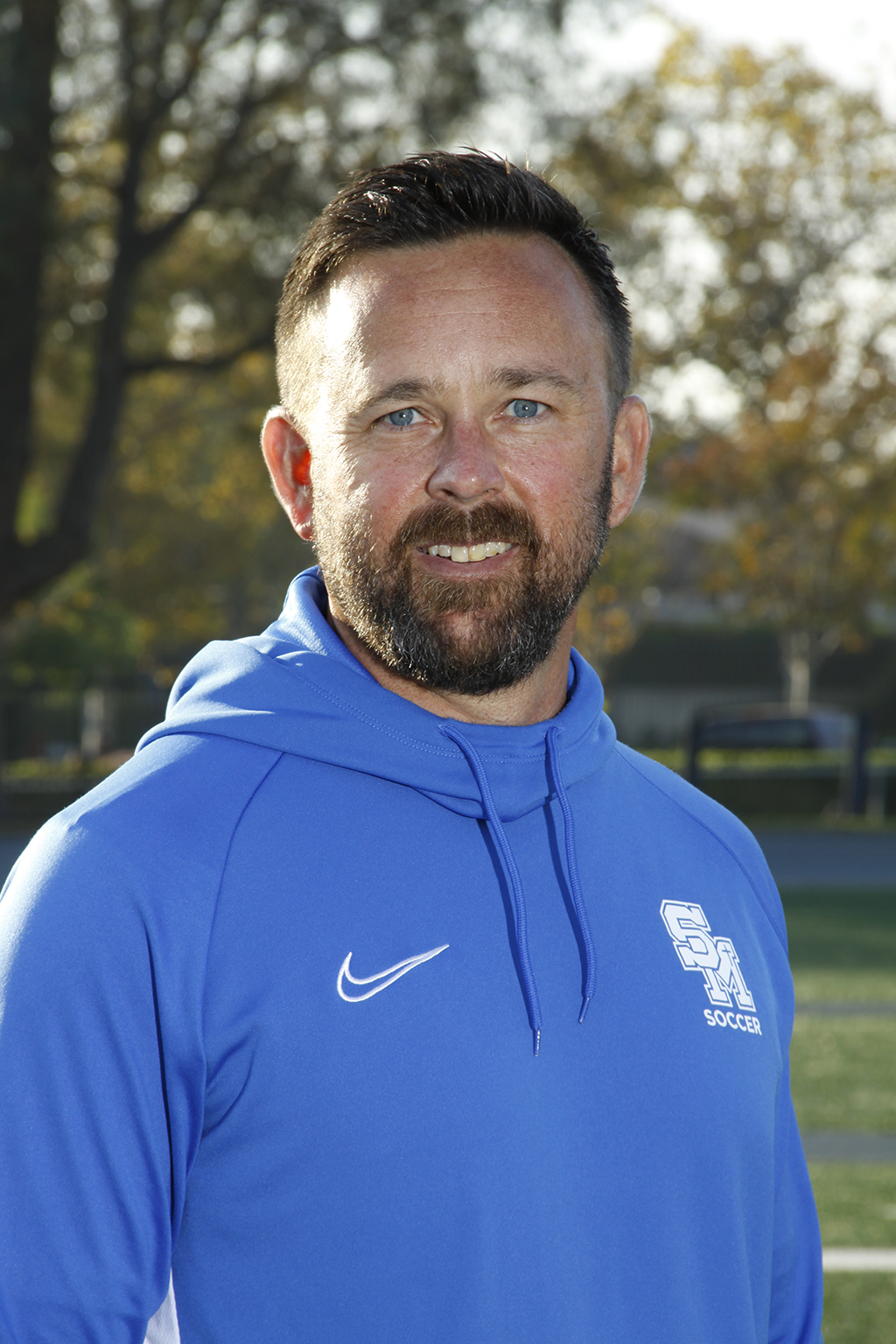 Coach Fraser grew up in Lake Forest, CA where he attended El Toro High School from 1994-1997. Upon graduation from El Toro he attended Southern Methodist University from (SMU) on an athletic scholarship. Coach Fraser played on the SMU soccer team from 1997-2000 where he earned two Western Athletic Conference Championships and one Missouri Valley Conference Championship. He was also a member of the first team in school history to make the NCAA Division I Final Four tournament in 2000. After graduating from SMU coach Fraser played professionally for the Milwaukee Rampage and was a member of first team in franchise history to earn an A-League championship. Coach Fraser has been head coach for the Santa Margarita boys varsity team since 2008. Under Coach Fraser the Eagles have one league championship and have made the playoffs for the past six years. In 2012 Coach Fraser was hired as an associate strength and conditioning coach and works with several of Santa Margarita sports programs in the weight room. In 2016 he was hired on as full time employee at SMCHS and teaches P.E. as well as serving as an Assistant Athletic Director, in addition to his coaching and weight room responsibilities. Coach Fraser graduated from SMU in 2001 with a Bachelors in psychology. In 2010 he earned his masters degree in Exercise Science, with an emphasis on performance enhancement and injury prevention from the California University of Pennsylvania (CALU). Coach Fraser currently lives in Foothill Ranch with his wife Jennie and two sons Bram and Gavin. 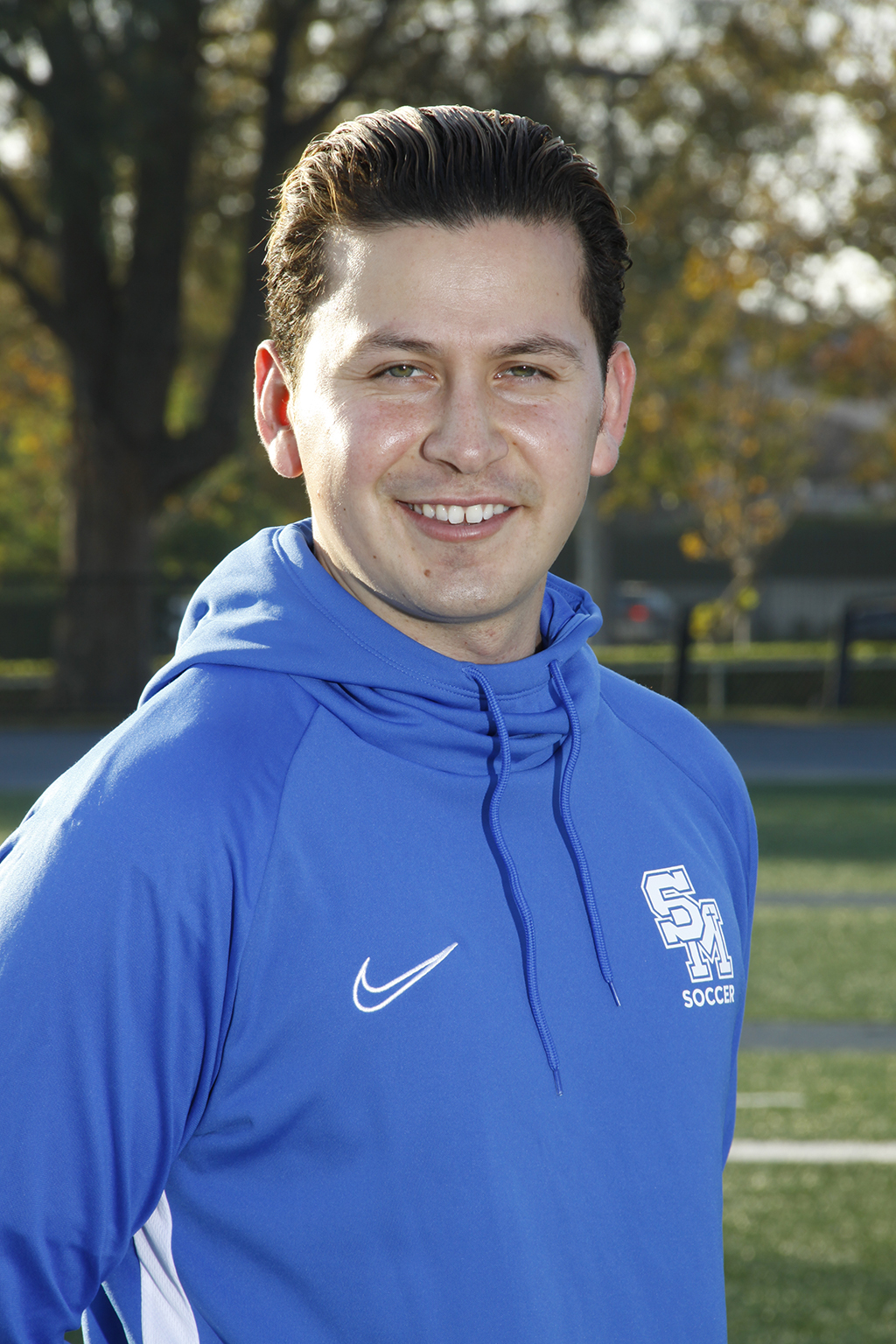 Coach Pizano is entering his first year with the Santa Margarita Eagles. He comes from an extensive playing career which saw him climb the ranks of the Coast Soccer League from Bronze, Silver, and Silver Elite winning back to back to back titles with his youth club the MVSC Titans. In high school he played for El Toro making Varsity as a freshman. He would play for two years before being called up to United States Men’s National Team Camps and making the switch to Academy. He joined up with the Pateadores Academy and in his first year made a deep run into playoffs ultimately gaining entry into the Academy Finals Week. As a collegiate player he has played for Santiago Canyon College, California Baptist University and Hope International University. Coach Kyle Pizano is a former JUCO, NCAA, and NAIA soccer athlete. In his stint with SCC he played under Coach Wade Fraser becoming a crucial player and winning First Team All Conference in 2016. There after he transferred to CBU and continued being a role player. In 2018, Pizano committed to HIU and was named GSAC All Conference along with the Dean’s Honor Roll. Throughout the summer he would train with PDL teams such as Orange County Soccer Club U-23’s, L.A. Laguna, and other adult amateur clubs like Cali Gators, PSC Soccer Combine, and SoCal Troop.

As a coach, Kyle Pizano began his trade soon after graduating from El Toro High School in 2015, where he returned to the program as the Boys’ Frosh Soph Assistant Coach. He would lead the chargers to second places finishes in league and the Zachary Butcher Memorial Tournament. The following year saw him leave ETHS and temporarily put a halt on his coaching, it would be in 2017 where he would be given the opportunity to be the Head Coach for the Laguna Hills High School Boys’ Frosh Soph Team. “That year definitely taught me a lot,” says Coach Pizano, “we struggled to find the back of the net all season but it really matured me in terms of the high school game.” In 2018, Coach Pizano made a move to cross city rivals Capistrano Valley High School and took charge of the Girls’ Junior Varsity team. During season they placed second and were undefeated the last five games of league. The 2019 season will see Coach Pizano as the Boys’ Varsity Assistant for Santa Margarita Catholic High School. In addition to his high school work, Coach Pizano is the current Hope International University Men’s Assistant Coach. He also works with First Touch Soccer, whom is affiliated with AYSO and is the trainer for the Rancho Santa Margarita Region. He has worked with U.K. International and Happy Feet, two well established youth programs in the Southern California area for recreation and competitive soccer.

Coach Pizano is currently working on his B.A. in Business Administration and plans to obtain his Master’s in Sports Management. He is eager to ply trade at the highest level of high school soccer and relishes this opportunity. On his spare time, Coach Pizano like to support his team Real Madrid C.F., and enjoys playing indoor or Futsal. 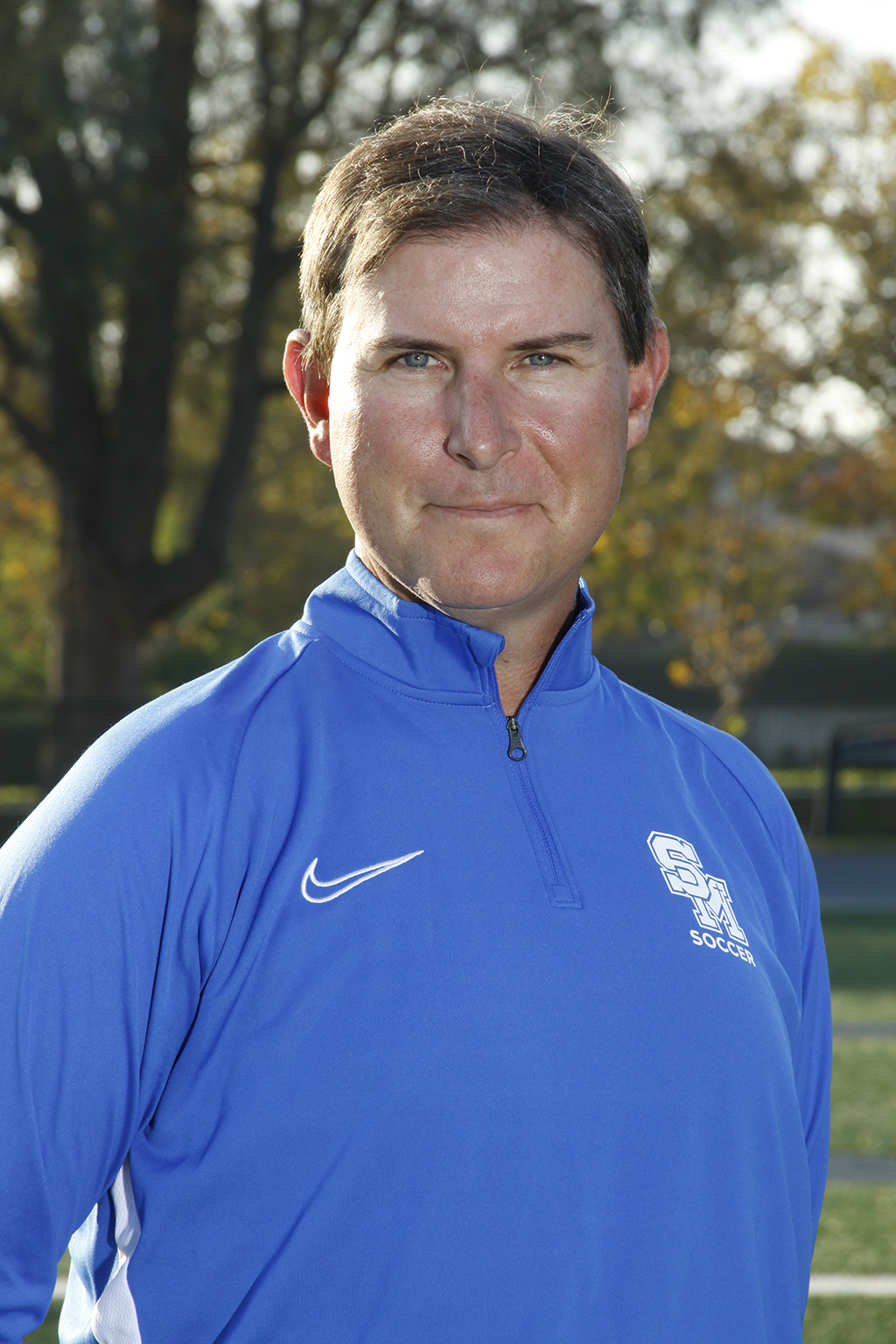 Coach Adams was born in Liverpool UK and grew up playing soccer at the competitive and collegiate level. He studied in Sports business administration and later received a BA in Jazz and popular Music. Coach Adams relocated to Southern CA in 2002 were he established himself as a Coach in the CSL and SCDSL competitive youth Soccer leagues. He has currently been coaching at the Pateadores youth soccer club since 2009. Coach Adams also has experience Coaching at the State Level were he Head and assistant coached the Boys 93 and 94 Olympic Development Teams. Culminating in winning a Regional Championship in 2007 with the Boys 93 Team in Las Vegas. He holds an English FA, National USSF and National Youth Coaching License. 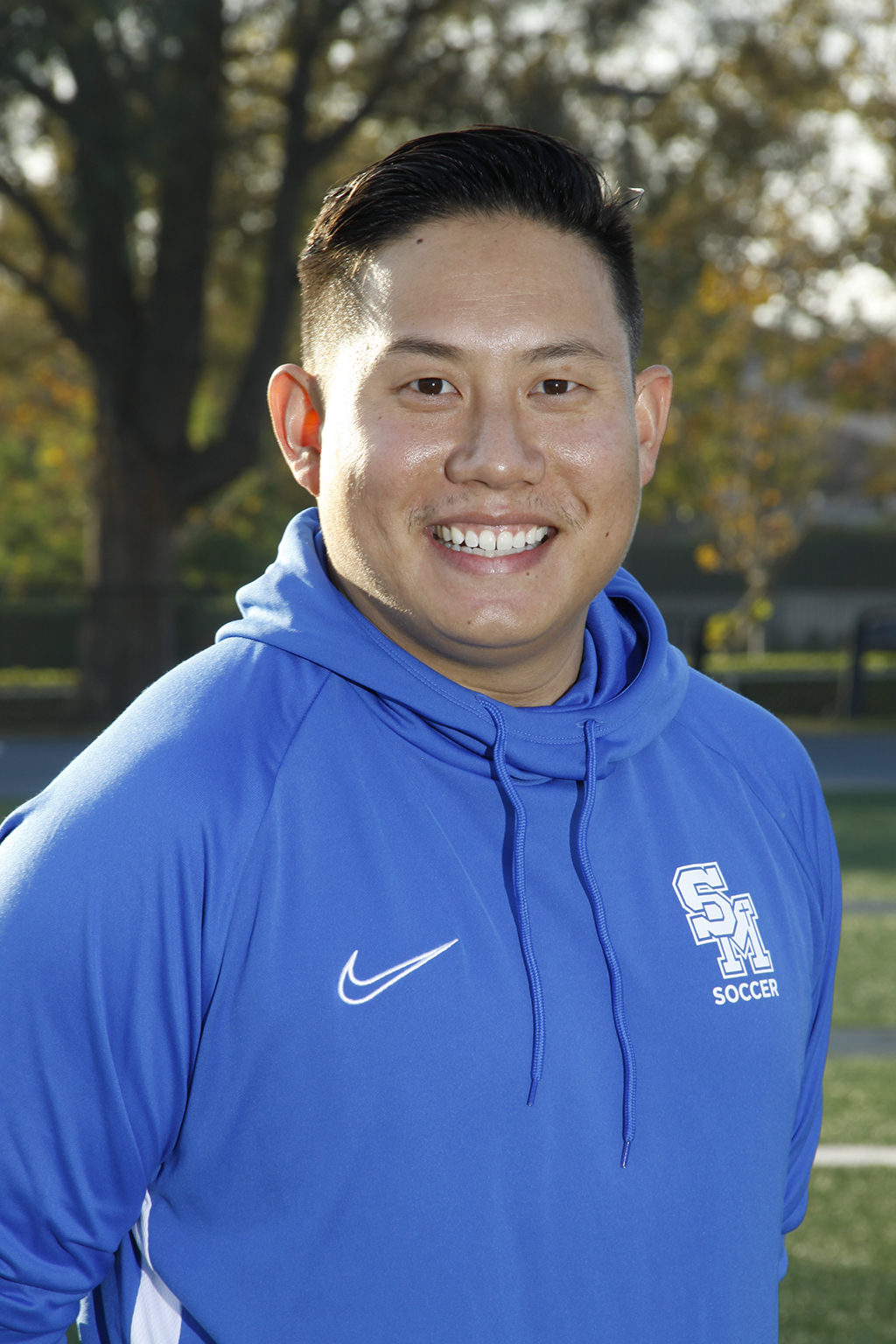 Coach Luna is in his first year coaching with the Eagles and will serve as a volunteer frosh soph assistant coach. He is excited for the opportunity to work with Coach Fraser and the rest of coaching staff in helping develop leaders on and off the field. He plans to continue furthering coaching licensing with the United States Soccer Federation (USSF) in the future.

As a player, Coach Luna played club soccer for Orange Soccer Club (OSC) Milan as a centerback. During his time with OSC, he helped lead the club to their highest league promotion to silver-elite, to numerous tournament champions, and to the quarterfinals at the Cal South State Cup. In high school, he played alongside Coach Kremer at rival, Servite High School. At Servite, he played as a defensive midfielder. Scoring and beating Mater Dei at home is his favorite memory. He continues to play pick up soccer and in a recreational men’s league.

Coach Luna attended the University of San Diego for his B.A. in Psychology, West Coast University for B.S. in Nursing, and is currently, attending Brandman University for his Doctorate in Nursing. In his free time, he enjoys hanging out with his wife, Lexan, and their dog, Rooney, training for triathlons, and waking up early on the weekends to support Manchester United.

The Boys' Soccer Program at Santa Margarita Catholic High School is an integral part of the total educational program. It is a Christ centered soccer program that contributes to the development of the individual player in every aspect: spiritual, intellectual, physical, emotional, and social.

The coaching staff will strive to enable players to develop their soccer skills and learn the values of good sportsmanship, as well as responsibility to one's team, school and self.

Striving to win is very important in that it teaches the player to be the best person he can be, making them proud of themselves and their accomplishments.

The coaching staff at SMCHS will seek to assist their players in developing:

The social skills to effectively interact and cooperate with others;

An understanding of commitment, responsibility and loyalty

An ability to control emotions and display good sportsmanship; and

The skill, ability and knowledge needed to compete successfully in soccer.

Lord, God of strength, thank you for giving me life. Thank you, for my talents to participate in soccer. Please keep my team safe from injury and harm this season.

Teach us commitment to play hard but fair. Teach us to play with discipline and strength but never be hostile. Instill respect for each other and reward us for our responsibility, perseverance and loyalty. Grant us strength to best our opponents on the field, but instill in us the character to always extend a hand of friendship.

Teach me to be aware of the brotherhood I have with all athletes, even my opponents; free me from the temptation to fake, foul or cheat. Help me to play well, to use my powers to the full, to see them as gifts from you.

Be with me when I need to play hurt, when I have to deal with the pain of injury and disappointment. Teach me to be fair and gracious in winning and in defeat. Help me to always play with heart and to never lose heart.

CALIFORNIA STATE PLAYER OF THE YEAR

CIF PLAYERS OF THE YEAR

ORANGE COUNTY PLAYER OF THE YEAR

L.A. TIMES PLAYER OF THE YEAR

This award was established in 1990 in the name of Father Martin Benzoni to honor a Santa Margarita Catholic High School senior soccer player. In receiving this award the recipient is recognized not only as an outstanding athlete, but more importantly as a leader and scholar in his everyday life at SMCHS. The senior player selected to receive this prestigious award will have his name inscribed on the permanent trophy displayed in the SMCHS trophy case and will receive $200 to be used at his discretion for academic pursuits.

Courage In the Face of Adversity | Brian Loughman Award

In 2010 the Santa Margarita soccer family tragically lost one of its members to cancer. His name was Brian Loughman. Brian (SMCHS class of 2004 and UCI class of 2009) was diagnosed with terminal cancer (stage 4 melanoma) in December of 2009. Brian responded to his illness with grace and determination to beat the cancer. He remained positive and cheerful throughout his treatment which included brain surgeries, radiation treatment and chemotherapy. Brian died on September 3rd, 2010. Some of his last words were "what can I do to thank everybody who's been there for me these past few months?" The program and Brian's family decided that it was only fitting to name an award after Brian in his honor. This award had been donated by Brian's family in his memory to those who had best demonstrated courage in the face of adversity.