Coach Jill Hegna joined the SMCHS Girls and Boys Golf Coaching staffs in 2005/2006. She coached the JV Girls and JV Boys teams for six successful seasons. In 2011, she transitioned to the Varsity Girls Coaching staff. Coach Hegna is currently the Associate Dean of Students and Director of Girls Golf/Head Varsity Coach. Her combined Girls and Boys Coaching record is: 265 - 47 (Overall) and 146 - 29 (League). Coach Hegna graduated from Saint Anthony’s High School in Long Beach, CA, and then attended LBCC for a year, then transferred to Fort Lewis College in Durango, CO on a volleyball scholarship. She received her bachelor’s degree in Physical Education K-12 and then attended Kansas University Graduate School. Coach Hegna has taught and coached various sports at the Elementary and Secondary level while living in Colorado, Kansas, Connecticut and California. She has three daughters who graduated from SMCHS: Megan Hickey-Barbosa ’04; Lauren Hickey ’07; Katy Hickey-Miller ’09. In her spare time she and her husband Mike share a passion for family, golf and boating.

John Fitzpatrick has coached Santa Margarita softball for the past 17 years. Coach Fitzpatrick has recently agreed to assist with our golf program. John golfs as a hobby and he is looking forward to becoming a part of the SM golf program on an administrative level. Coach Fitzpatrick received his bachelor’s degree from Northeastern University and acquired a master’s degree in public policy from Long Beach State. He and his wife Therese have two children, Alycia '01 and Mike '04. His favorite quote is "Anything that doesn't kill you makes you stronger."

Kenny McMillan joins the Lady Eagles for the Spring season of 2021. Coach Mac is also, currently the Tight Ends and Running Backs Coach on the Varsity Football team here at Santa Margarita. He came to us after spending the last two seasons as the Fullbacks and Tight Ends Coach at Cal Poly. While at Cal Poly, McMillan coached fullback Joe Protheroe through a record-breaking rushing year of 1,810 yards in 2018, when he was a Walter Payton Award Finalist and First Team All-American. In 2019, McMillan coached another 1,000+ yard rusher, Duy Tran-Sampson, who was also a Big-Sky All-Conference player and Sophomore All-American. Prior to being hired as a full-time coach for the Mustangs, McMillan was an undergraduate assistant all 5 years as a Cal Poly student. Before attending Cal Poly, Coach Mac was a Wide Receiver at Serra High School in San Mateo and spent his high school summers as a caddy at Peninsula Golf and Country Club in San Mateo. Kenny began to love and appreciate the game of golf and has been playing consistently throughout his years. Kenny was raised by Bobby and Julie McMillan and has one older brother (Sean McMillan) who is the Director of Baseball Operation’s at Santa Clara University and spent his off season as one of the grounds keeper’s at San Jose Country Club.

Jason Ford ’15 joins the Girls Golf coaching staff for the 2021 Spring Season. Coach Ford is an avid golfer and former varsity player in the SMCHS Boys Golf Program. Coach Ford holds a Bachelor of Arts from Texas Christian University and a Master of Arts from New York University. He currently works at the university level as a researcher and administrator in international affairs. Coach Ford is very excited to join the staff and contribute to the Lady Eagles’ tradition of success.

Steve Bowles will be leading the 2021 Lady Eagle JV Gold team. Coach Bowles is our newest Associate Dean of Students after recently retiring as a Commander with the Seal Beach Police Department. Coach Bowles is no stranger to the Trinity League as he is a graduate of St. John Bosco High School. Coach Bowles graduated from California State University, Long Beach with a Bachelor’s Degree in Sociology and a Master’s Degree in Public Administration. He also holds a Master’s degree in School Counseling. Coach Bowles is not just a Dean and a Coach, he is a proud SM dad of his daughter, Carley (’22)! We welcome his passion for the game and his love of teaching to our staff!

Coach Alicia Sayles joins the SMCHS Girls Golf program this year, after eight years with the SMCHS girls’ water polo program and several more with the boys’ water polo team and swim program. She has coached the girls’ water polo program to two CIF titles and her youth 14 under boys’ team to a national championship. A graduate of SMCHS Coach Sayles earned two CIF titles her senior year in swimming and water polo. Coach then attended University of the Pacific where she earned a bachelor’s degree in education and sport sciences. Recently she has completed her Masters in Coaching and Athletic Administration at Concordia University. Coach Sayles's true passion in sports is developing life skills, and mental toughness in her student athletes. Coach Sayles took up golf at a young age, playing for leisure with her family throughout her life. She is excited to join the golf staff, and work with a new group of athletes on improving their skills in this life long sport.

Santa Margarita Catholic High School endeavors to bring the person and teachings of Jesus Christ to this time and place through a holistic and nurturing educational experience. This is reflected in the Lady Eagles Golf Program, which seeks to encourage in its golfers, a positive sense of self-worth, self-discipline, personal responsibility, successful interpersonal relationships, and a commitment to Gospel values. We strive to honor the tradition and integrity of the game of golf and promote the highest standards of personal character and leadership in all areas of competition and life.

Education is a priority over Athletics

Attitude & Effort are everything

God comes first in your life

Loyalty to your teammates

OUR TEAMS TRADITION OF EXCELLENCE

Trinity League Player of the Year

Serra League Player of the Year 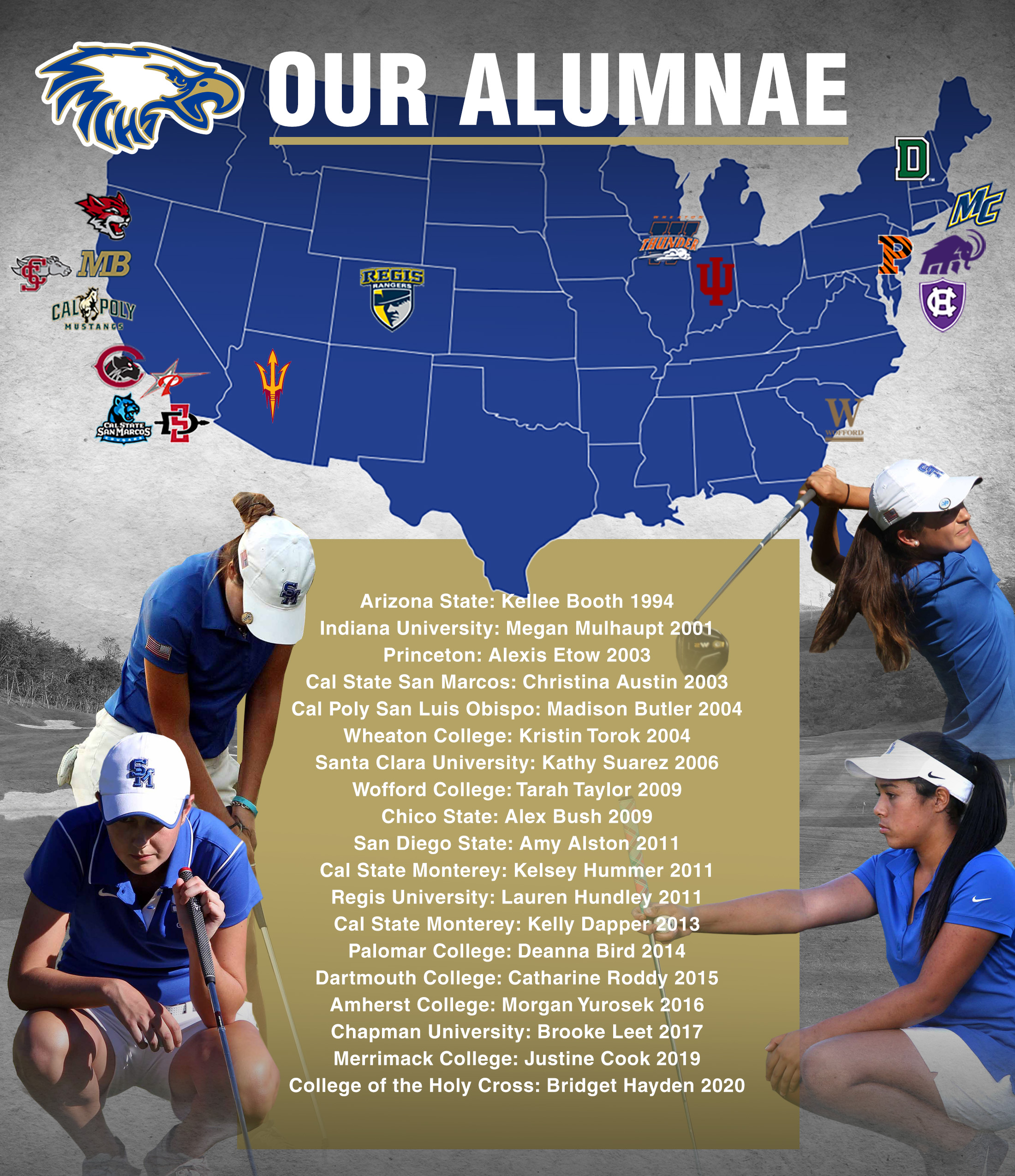