Welcome to the home of Lady Eagles Softball. Our history is rich in tradition with league titles, CIF appearances and All League selections. Our program is comprised of special young women that take pride in wearing our school colors and representing our Catholic -Christian philosophy in the spirit of athletic competition. The mission of our softball program is to train and prepare each athlete to establish a set of goals, and work as a team to achieve each objective, both on the field and in the classroom.

Varsity Head Coach John FitzPatrickCoach FitzPatrick returns for his 16th season as the Head Softball Coach of Santa Margarita Catholic High School, planning to defend the Lady Eagles 2019 Trinity League Championship. John has an overall record of 250-158-3, including 13 trips to the CIF playoffs throughout his tenure as the head coach. In 2017, FitzPatrick celebrated his 200th victory as the Eagles Head Coach. He also was at the helm when the Lady Eagles reached the pinnacle of high school softball in southern California by winning the 2010 Division 1 CIF Championship. In 2007, Coach FitzPatrick led the Lady Eagles to their first league title in the history of the school. John worked as an SM assistant coach from 1999-2001 where the Lady Eagles made three consecutive CIF playoff appearances. John has also coached for many years on the club circuit and enjoys helping his players reach the college level. Coach FitzPatrick received his bachelor’s degree from Northeastern University and acquired a master’s degree in public policy from Long Beach State. He and his wife Therese have two children, Alycia '01 and Mike '04. His favorite quote is "Anything that doesn't kill you makes you stronger." Coach Fitz can be reached at fitzpatrickj@smhs.org

After a two year stint as the head coach of Capo Valley High School, Coach Pete Manarino comes to Santa Margarita with a distinguished track record in softball coaching. He has made 5 College World Series appearances, 19 Regional appearances; and won 5 Big West Championship with Long Beach State and the University of Nevada Las Vegas. Prior to coaching at the collegiate level, Coach Manarino made 3 CIF Championship appearances at St. Joseph High School and Downey High School. Pete has had over 950 wins at the college level; a Hall of Fame selection; and was twice named NCAA Regional Coach of the year. Pete is married to his wife Cheryl, they have two children, Kristen 00’and Nick 03’ both Santa Margarita Alumni.

Hallie Wilson joins the Santa Margarita Catholic High School coaching staff this season after retiring from a 20 year playing career. Wilson attended the University of Arizona where she was a four-year starter for the Wildcats where she earned First-Team All American and Pac-12 Defensive Player of the Year honors during her four year stint at Arizona. Wilson also competed for the USA Women's National team before being drafted into the National Professional Fastpitch league by the USSSA Pride in 2015. She spent four seasons with the Pride and was named All-NPF in three of them. Hallie began her coaching career post-college with the SunCats travel ball organization and now coaches in the OC Batbusters organization. Her favorite quote is "work hard in silence, let your success be your noise."

Coach Lutterloh is an experienced coach with over 12 years invested in coaching softball and many more coaching and playing baseball. Mike moved to California from Canada at the age of 9, growing up in Lake Forest, and has lived in Rancho Santa Margarita with his wife Kindra since they were married in 1997. His primary goals are to help the athletes focus on the little things, which he feels are the difference makers, and to create mentally strong athletes who focus on their approach and their reaction to the result…..not just the result. Mike is the head coach of Firecrackers-Lutterloh, a premier, nationally ranked 18 & under travel ball team, and has helped 25 of the 30 Firecrackers-Lutterloh players sign or commit to play softball at some of the most prestigious athletic and academic universities in the country, including Harvard, Duke, Georgetown, Oregon, Cal, Seton Hall, and Notre Dame. Mike and Kindra have three daughters and one son, Makenna, Abigail, Peyton, and Jacob.

Toni will join Head Coach John FitzPatrick and Assistant Coach Pete Manarino for the 2020 season. Mascarenas attended Pacifica high School, and was part of the 1997 CIF/National Championship team.  She went on to attended the University of Arizona where she was a three time All-American, the NCAA home run leader in 2001 and a University of Arizona Hall of Fame Inductee. Toni helped lead Mission Viejo High School to ten league championships (2006-2016) and two CIF Championships in 2014 and 2016.  She was also selected selected by the OC Register as the Co-Head Coach of the Year in 2014. Toni brings a wealth of coaching experience from both high school and her 14U Batbuster Club Team.  She also works with her former teammate Jennie Finch throughout the country, conducting youth training camps, and giving back to the community. Toni is married to her husband Junior Arnold and together they have six children.

Coach McGregor has 13 years of experience coaching softball, the past 3 of those years has been with SM JV Program. Prior to coaching high school softball, Coach McGregor coached travel softball teams where his teams had high State level rankings. Derek grew up in Springfield, Illinois and moved to California in 1980.He has 3 children, Nicole who played in the SM Softball Program and Austin (AJ) who played in the SM Basketball Program and Kadin who is currently a Sophomore and also playing Basketball. Coach Derek also has 17 years of coaching other youth sports and also teaching after school programs. On a professional level, he owns and operates a civil engineering and land surveying business since 1987.He is married to his wife Debbie who is a very active SM Volunteer for numerous programs at SM. Coach Derek’s family has had the opportunity to host 2 SM International students of which one has gone on to play D1 Basketball.

Coach Rizzo is a highly experienced softball coach with over twenty-five years invested in the game. Frank is a native of California, growing up in San Clemente, Ca. He garnered his experience in the men’s fast pitch league, where he spent 28 years playing and administrating the league. Along with his head coaching responsibilities, Frank’s role on SM softball is program development and works together with Coach Fitzpatrick, training and developing new players. His primary goals are to create a positive environment while establishing a strong foundation for SM Softball. Frank is the former head coach of Concordia University as well as JSerra High School. He also assisted at San Clemente High School and Saddleback College. Frank lives with his wife Tami and they have two daughters, Jenifer and Sara.

Coach Mel is an experienced softball coach and player. She earned a full scholarship to Creighton University her freshman year and then transferred to Point Loma Nazarene University for the next three years. As a college athlete she had a career batting average of .416, ERA of 1.12, and holds the school records for home runs and rbi’s. After college, she played professional softball overseas in Germany, and then returned to the PLNU softball program as an assistant coach for a year. After receiving an MAT from USC, Coach Mel was later an assistant coach and head coach for La Habra High School. Mel joined the SM staff as a Math teacher in 2015, and hopes to be a positive role model for her students, and players in the softball program. She was recently married and lives with her husband, Scott. 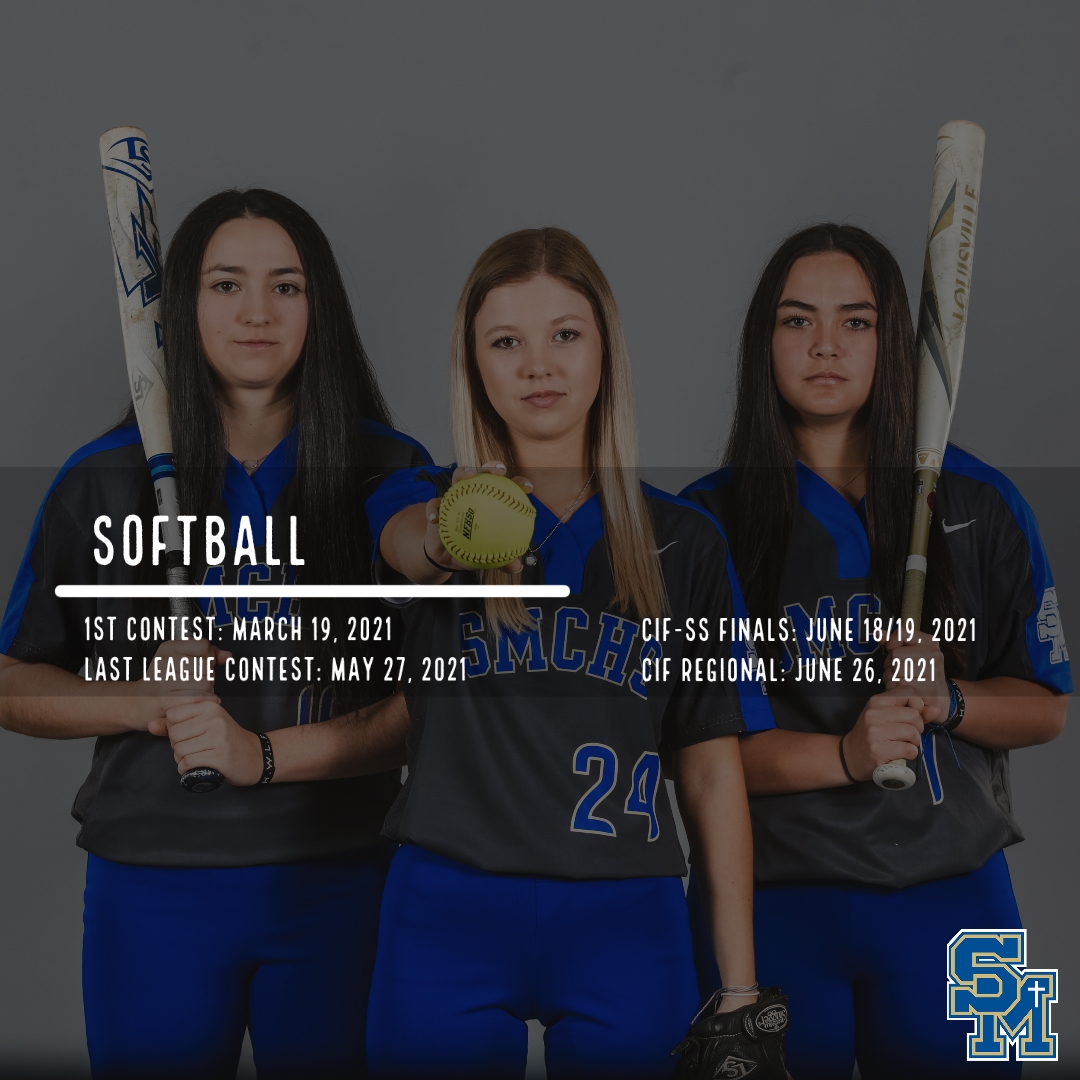 405 North; Exit Bristol; Right on Bristol; School is on the corner of Bristol and Edinger

5 North to 57 North; Exit Nutwood, Left on Nutwood; Right on Acacia, School is on the Right

405 North to 605 North; Exit Rosecrans Avenue; Left of Rosecrans; Right on Bellflower; School is on the Right

5 South to Avery Parkway; make a Left; entrance is on the Left; go to the stop sign and make a Right to the football stadium; parking is on the Left.